Whether you are a local or a visitor to Cyprus, you will no doubt agree that the gorgeous waters that cocoon the island are one of the country’s biggest selling points, with sand fringed shores and crystal clear seas that are simply begging to be enjoyed. The great news is that there’s a huge variety of dive sites to enjoy, whether you are just starting out or have been diving for years. Read on to check the 10 of the best diving spots in Cyprus!

Hailed as every diver’s dream wreck, this is by far the most famous shipwreck on the island, actually rated as one of the top ten wreck dives in the world. The Swedish ferry, which sunk off the coast of Larnaca in 1980 on her maiden voyage, lies just 1.4 km off the Larnaca coast on its port side on a flat bed of sand and rocks.

Both the ferry and its cargo are still intact and are rather fascinating to explore, from the large propellers, to the ship’s cafeteria. Abundant fish have also made the wreck their home: keep your eyes peeled for schools of fish including grouper, barracuda and tuna. The dive starts at a depth of 17 metres and bottoms at 43 metres.

Given the immense popularity of the Zenobia wreck, Cypriot authorities proceeded with sinking a number of boats, to create more artificial reefs that would make ideal diving spots. Two of these wrecks include Lady Thetis (the goddess of Justice) and a fishing boat named Consdandis. Lady Thetis lies at a depth of 18 meters and was constructed in Germany, sunk in Cyprus waters in 2014, boasting several easy swim-throughs and penetration options for more adventurous divers. And if you are looking to spot some marine life, you will be pleased to know that the wreck is home to breams, damselfish and groupers. 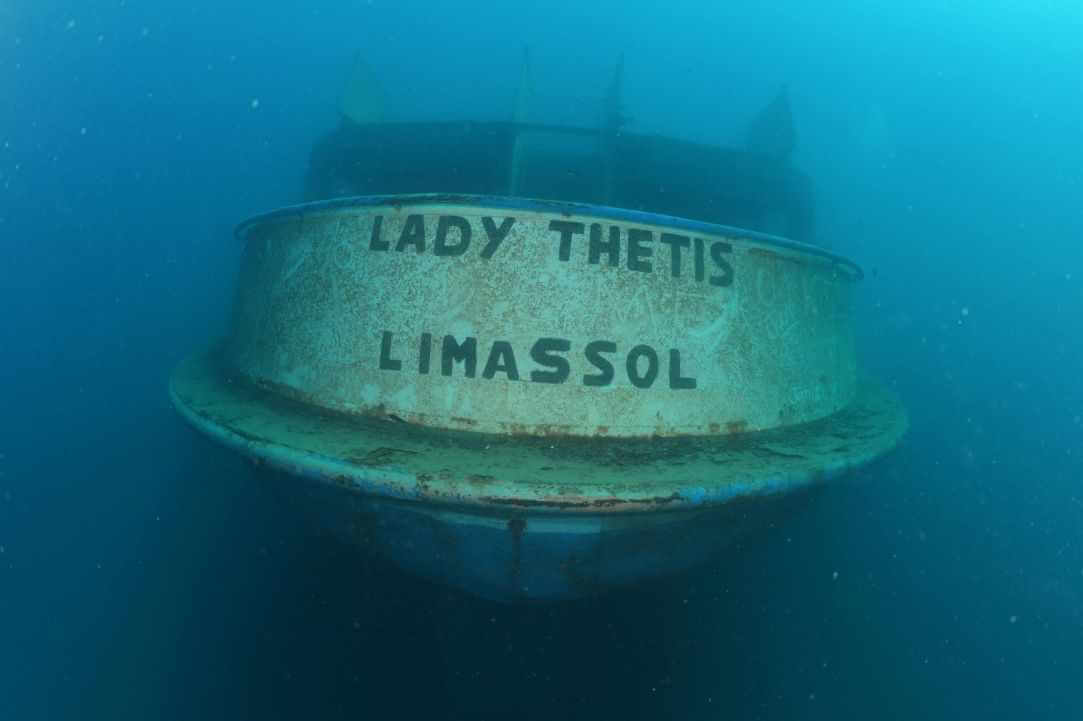 Right off the Imperial Crowne Plaza Hotel, Consdandis fishing boat was also sunk to give happy divers the chance to enjoy another recreational dive site. Consdandis originally operated as a bottom trawler and was built in the Soviet Union in 1989. She was registered at the Register of Cyprus Ships in 1997 and operated in international waters in the eastern Mediterranean Sea for a short period of time. Consdandis was sunk off Limassol in February 2014 – along with Lady Thetis – and sits in approximately 24 metres of water.

Akamas itself is breathtakingly beautiful, with the green and rugged peninsula jutting out into the captivating deep blue waters of the area. And it seems that heading to the wild western coast of the island for a dive is well worth the effort, with the so-called ‘devil’s head’ being a particularly popular spot, combining caves and interconnecting tunnels at a depth of some 11 metres. Lucky divers may spot green and leatherback turtles in the summer months, while there’s also plenty of marine life to take in and admire around the intricate rock formations. 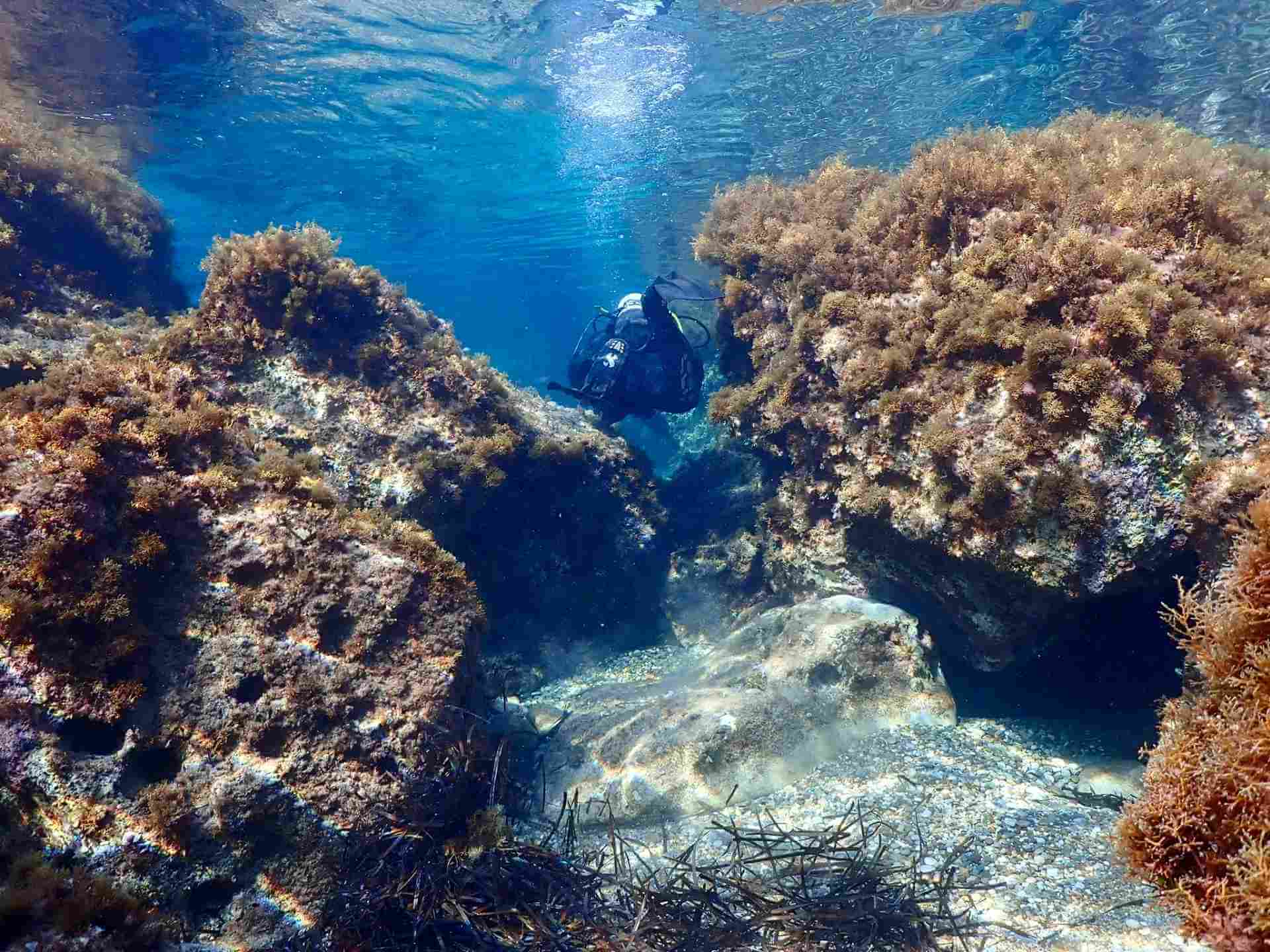 Hands down one of the most famous diving spots on the island,located in the hub of Protaras, this gorgeous spot is easy to reach and navigate, frequently used by diving schools for training dives. After all, you will only be going down to a depth of 10 metres. Home to a great feeding station – aptly named “The Fish Rock” – the area is brimming with marine life! At the deepest part of the site, underwater statues and columns will leave you wide-eyed.

As the name suggests, this site owes its name to broken pieces of antique amphora (an ancient ceramic container used for the transport and storage of various products). A fantastic site of archaeological importance, there are a number of caves to explore, including one with an amphora encrusted in the roof. According to a group of American archaeologists who investigated the site, it is believed this is due to movements in the sea bed over the last two thousand years. The dive takes you to a depth between 5 metres and 12 metres, as you explore the caves and gullies. 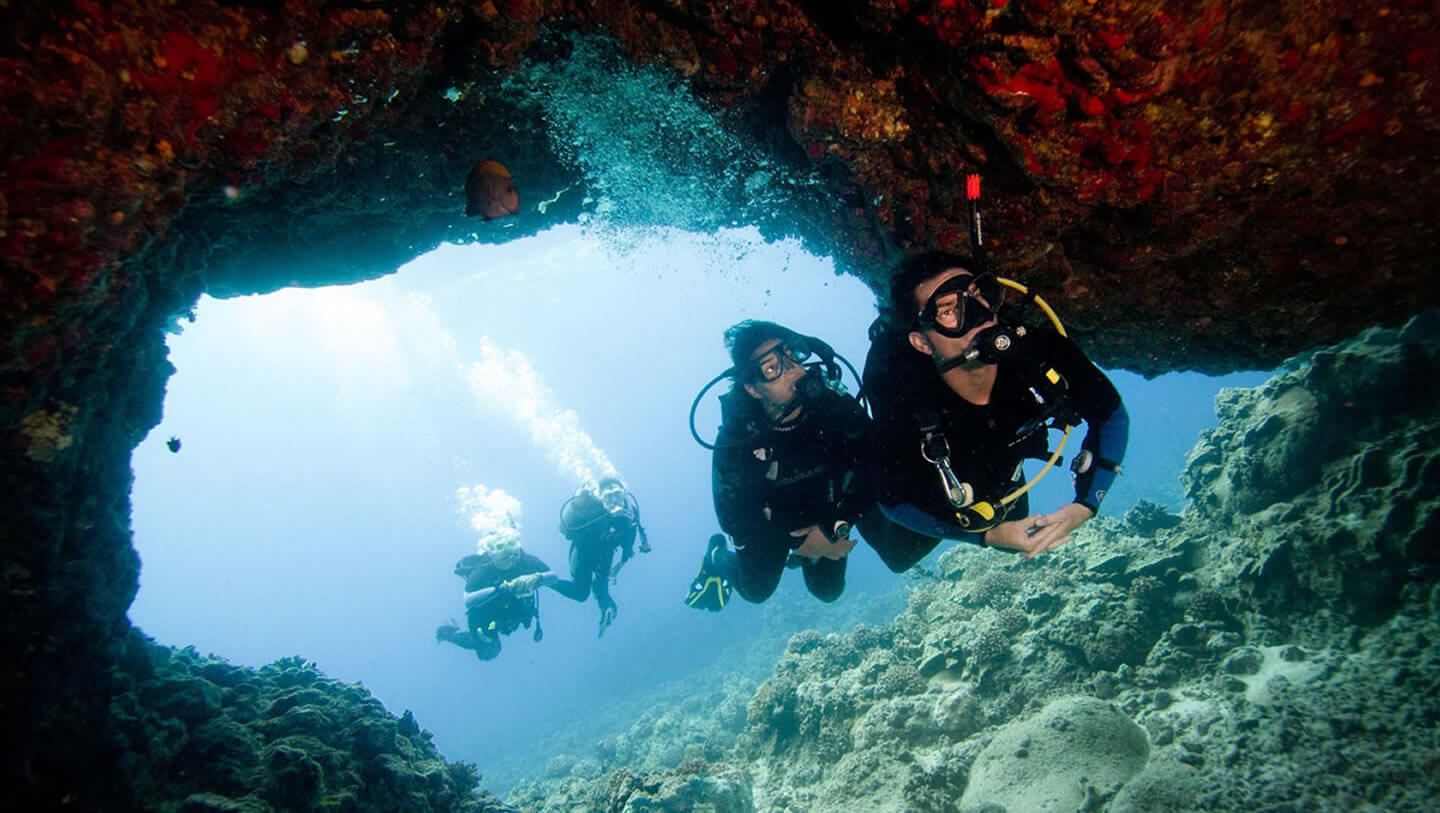 Not your typical dive site, this one comprises of an underwater cave complex with a seabed filled with amphora; a result of the many trade ships that once crashed on the Cape Greco rocks. This well-known dive spot is accessible from the coast, and is particularly popular because of a rock formation in the shape of Cyprus – a picture perfect underwater spot if ever there was one!

A ten-minute boat ride from Coral Bay harbour, this makes for a very scenic dive, with a wall, spectacular cave and swim through, taking you to a depth of 6 to 25 metres. The island is in fact small enough to dive multi-level all the way around. The cave itself is covered in a variety of purple and pink calciferous algae, while many divers often spot yellowfin barracuda at the site. 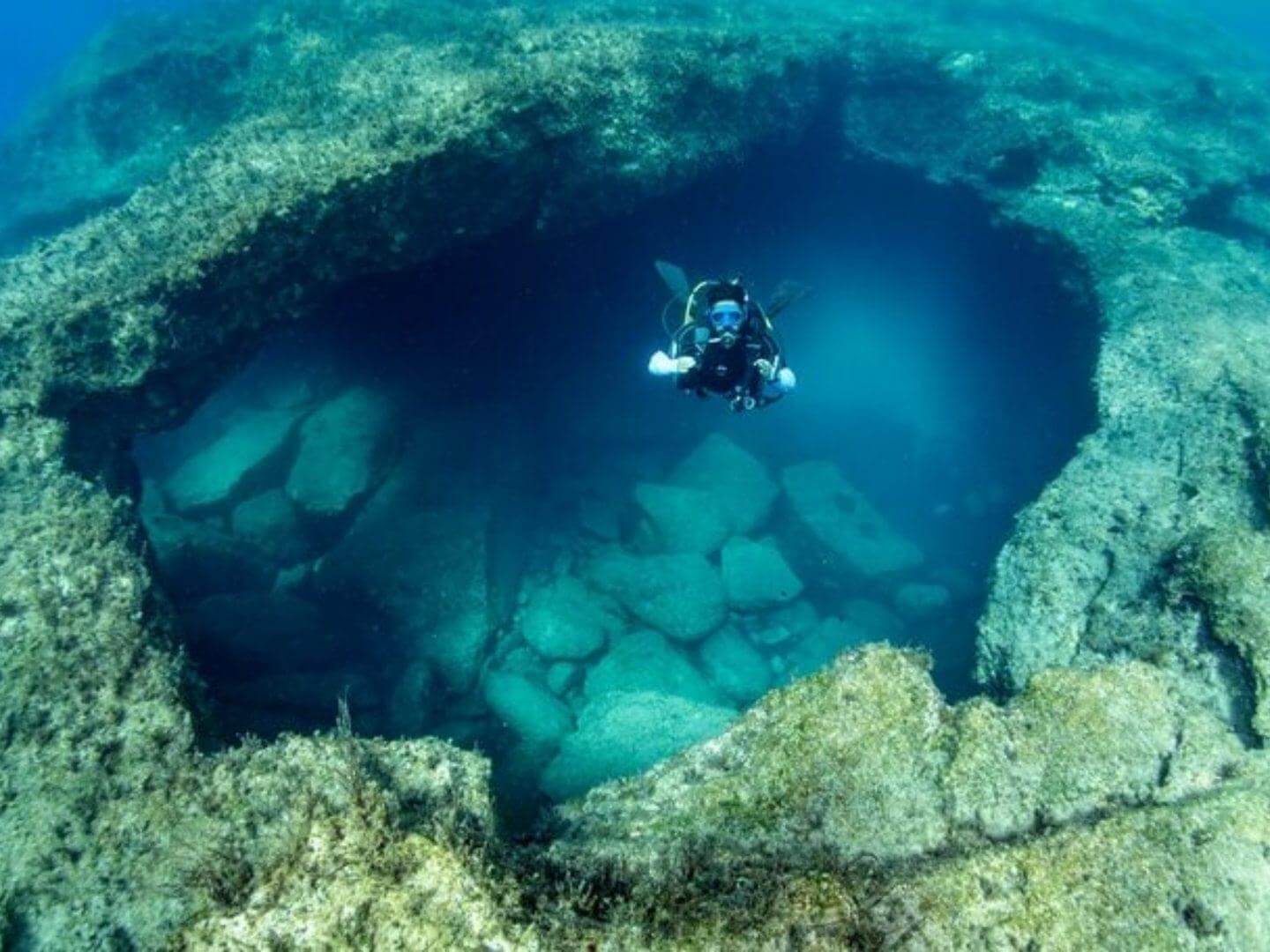 Just a stone’s throw from the gorgeously quiet Avdimou Bay, is an underwater site that some say is the best in Cyprus, following the spectacular Zenobia wreck. Only suitable for experienced divers, this one consists of a vast underwater cliff face with caves, pinnacles and a tunnel which offers drop-offs from the 20 metre to 60 metre levels. The site is also a great place to spot large pelagics such as tuna and jackfish, as well as plenty of octopus and moray in the mix.

Although not technically a canyon as such, this is a great diving spot on the south part of the stunning Cape Greco National Park, right beneath the cliffside.  The dive site is accessible from the shore and is best known for its stunning rock formations and rich marine life. The canyon is notorious for its difficult to navigate entry point, so it’s advisable that you only head here if you’re in good physical condition. The canyon has a visibility of 25 metres and is found at a depth of 22 metres.

Book Your Next Cyprus Vacation With Confidence!With privacy, your own pace and the ability to choose your activities, there is no better stay than at a private Cyprus villa for your holiday. As we understand it’s difficult to commit to travel plans at the moment, we are offering flexible booking conditions. Book your family villaholidaynow with the guarantee you will not lose your payment.

If you wish to book for Autumn 2022/Winter 2023 or wish to make a booking for next year, please contact us below and we will be more than happy to assist.

Courtesy to: My Cyprus Insider